Excerpts from the book, City of San Diego and San Diego County: The Birthplace of California, by Clarence Alan McGrew, published in 1922.

“With other cities of the nation San Diego paid heavy toll in the influenza epidemics, the malignancy of that disease coming close to San Diegans in the fall of 1918, when quarantine regulations were enforced here in an effort to curb the spread of the trouble. One quarantine was in force from October 14 to November 9, during which period the churches, schools and theatres of the city were kept closed. Masks of gauze were prescribed December 6 of that year, and stores were kept closed from December 6 to December 9 in an effort to prevent crowds from gathering in any place, the doctors having concluded that in this way some good would be accomplished. From December 10 to December 24 more liberal quarantine regulations were in force.

“The schools, closed because of the influenza epidemic, were reopened again January 6, 1919.”

“In this period [in National City] a hospital was operated [by the local Red Cross branch] in several buildings on the high school grounds, and the local doctors, already rushed by private cares, rendered praiseworthy service. Once a month for twenty-seven months an automobile loaded to the top with such things as men in a hospital enjoy was sent to Camp Kearny.”

As we all struggle to deal with issues of social distancing amid having to maintain lives and livelihoods, our household has been doing a lot of communicating by mail–electronic and paper. I was reminded of a historical San Diego County resident who inadvertently provided some advice on the value of “virtual” communication over a century ago..

Eliza Sikes, who lived in the farmhouse I wrote about in an April post, was writing a letter in October of 1881 to her friend Martha Oaks, who lived in northern California. Eliza had gone through a traumatic time. That April, she’d lost Zenas, her husband of 27 years. He’d died in surgery after being kicked in the leg by horse twice over the previous year. His recovery from the first kick had been difficult and the second kick caused a fatal infection.

Since that time Eliza had been dealing with the loss of her life partner while also trying to maintain the family farm with the help of her grown children.

The Sikes and the Oaks had mutual friends and family on farms at both ends of California and Eliza chatted about various acquaintances in her letter, also talking about the presence of game and the weather (“Geese are coming in a little, a good indication for rain.”). Just before closing her letter she wrote this:

“Rest assured your letters are always welcome, being very lonesome. Thought a chat with a friend even on paper might help drive the blues away.”

It was interesting to re-read those words in the context of our current situation. A chat with a distant friend or relative, even on paper or even electronically, can help. Our household can vouch for that.

I was also intrigued by her reference to “the blues.” I turned to an old hardback book I got at a used book sale decades ago, The Father of the Blues, by W.C. Handy. Handy was the composer of some of the first professionally published blues songs, including “Memphis Blues” and “Saint Louis Blues.” Those songs were originally published in 1912 and 1914, respectively, but in his book Handy traces the origins of the blues to folk music he heard growing up as the child of former slaves in Alabama. In his youth in the 1880s and 1890s, working as an itinerant musician, he wrote of the influence of the music he heard sung and played by farm field hands, railroad workers and others in rural and urban areas across the country.

Whether Eliza Sikes had heard such music or not, she understood the same feelings that Handy did when he wrote that “Suffering and hard luck were the midwives that birthed these songs. The blues were conceived in aching hearts.”

Digging into history can reveal a lot about how life evolves, right down to the words we speak. When most of us hear the word “broadcast,” we undoubtedly think of radio, t.v. or (trying to keep ahead of the curve here) podcasted electronic programming. I certainly did.

But some of you readers may recall a post I did last fall about the aftermath of a windstorm in the Poway Valley in January of 1896. I quoted from a newspaper account that reported “Several barns and other outbuildings were overturned or scattered broadcast…”

That use of the word led me to Merriam Webster and the discovery of another, older definition of “broadcast,” which is “to scatter or sow (seed or something similar) over a broad area….”

Sure enough, a check back at other issues of the Poway Progress newspaper bore out that definition. For example, an 1894 column about how to resurface a road with gravel advised that “the broken stone should be spread broadcast with shovels to insure a thorough mixing….”

I also found that historical usage in a book by Kumeyaay scholar Michael Connolly Miskwish in his 2006 book, Sycuan: Our People. Our Culture. Our History. In describing the agricultural society of the original indigenous residents of San Diego County before the coming of Europeans, Miskwish notes that a “traditional harvest practice” included “the burning of the fields after harvest, and then hand-broadcast reseeding.”

As we deal with sheltering in place and social distancing, I’d like to offer my readers a virtual visit to a piece of San Diego County history.

Just across the street from the Westfield North County Shopping Center in Escondido stands the Sikes Adobe Historic Farmstead. A part of the San Dieguito River Park, the farmstead includes a house which has been restored to its period of significance, the years from 1869 to 1899 when it was occupied by the Sikes family, pioneer settlers in northern San Diego County.

Here’s a photo of the farmhouse, circa mid-1880s and courtesy of the Poway Historical and Memorial Society: 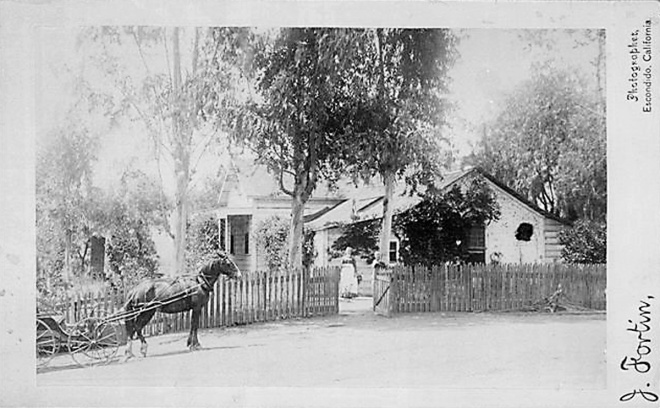 It shows Eliza Sikes and one of her daughters standing near their open gate, perhaps preparing to go out in the family “car,” the horse-drawn wagon visible just outside the gate.

Now here’s a photo of the same house, from roughly the same angle, 126 years later, in 2011.It was snapped by yours truly while I was working as a docent at the farmstead:

This farmstead has survived a lot of history which the River Park was able to preserve and share with the public. Right now just these views are available as the farmstead is off limits due to the local and state pandemic restrictions. You can find out more about its history from my books, Valleys of Dreams, and: Once Upon A Town:Bernardo, Merton and Stow, which are available for sale on this site. You can also check on the San Dieguito River Park’s website , http://www.sdrp.org/wordpress /for updates on visiting the farmstead.

In the meantime, keep safe everyone!

Here’s a snapshot of San Diego County in the depths of the Great Depression.

“Build Highways for Board While Jobs Are Scarce” was the headline from a San Diego Union article on March, 5, 1933.

“Eight hundred men, ranging in age from 16 to 84 years, occupy five state labor camps in San Diego County,” the article began. The camps, run by the state division of forestry, were part of a network of 46 camps statewide and 22 in southern California, according to the article.

“In return for six hours work daily, except Sunday, the men are given lodging, subsistence and such clothing and tobacco as the camp management thinks necessary,” the article stated, adding that since the setup of the camps the workers “have constructed 15 miles of new highway and 25 miles of firebreaks. In addition they have maintained a nine-mile stretch of arterial highway.”

The national unemployment rate was at 25 percent at that time, and the widespread joblessness was reflected in the local camps.

“Artists rub elbows with laborers, teachers discuss the depression with expert accountants; cooks, bakers, stewards, railroad men, including several engineers, mechanics, undertaker and a dentist, are some of the many trades and professions represented in the camps.”

“Many young men at the camps cannot communicate with their relatives and friends unless this help is given. Mail or bring your donations to the business office of The Union with packages plainly marked, ‘State Labor Camps.’ “