Steamship arrivals to the port of San Diego were common topics in the city’s newspapers in the late nineteenth century.

“The following passengers arrived from San Francisco and way ports on the steamer Orizaba yesterday” began one typical notice on page 3 of the September 14, 1872 San Diego Union. There follows a list totaling 47 names. None of the names would jump out to anyone but genealogical or historical researchers. Two of them caught the eye of yours truly:

Those two men happened to be natives of France, and their names were Basque in origin. Among the occupations Basques were known for in their native region was raising sheep.

Bernard Etcheverry had originally emigrated from France as a young man in 1856, seeking his fortune in the California gold fields. He did well enough that after a few years he was able to move on to other ventures, first in Santa Barbara, then back in his native France before coming to San Diego County in 1872. There he became a partner with Mr. Arrambide in the Santa Maria Ranch, in what is today Ramona.

It appears they returned to their shepherding roots. A notice in the San Diego Union’s edition of July 22, 1874 reads: “We notice that Messrs. Arrambide and Etcheverry of the Santa Maria Ranch have imported direct from the Government farm at Rambouillet, France, two very fine merino rams. The wool is of very long staple and exceedingly fine, and at the same time free from the oily matter usually found in those fine sheep. The rams cost over $500 each. “

“By 1881, Bernard Etcheverry was running 12,000 sheep on his 16,700-acre Santa Maria spread,” wrote Charles Le Menager in his 1989 book, Ramona and Round About. At the same time, Etcheverry promoted other types of agriculture, including fruit orchards, vineyards, barley and wheat fields.

“He encouraged sharecroppers to set up homes and farms on his broad ranch and was said to be a generous landlord,” Le Menager wrote.

If you’d like to find out more about the role played by Bernard Etcheverry and another French immigrant in Ramona’s history, you can find out in my book, Valleys of Dreams, for sale through this website.

Sources for this post included Charles Le Menager’s book, Ramona and Round About, historic San Diego newspapers and the archives of Ramona’s Guy B. Woodward Museum. 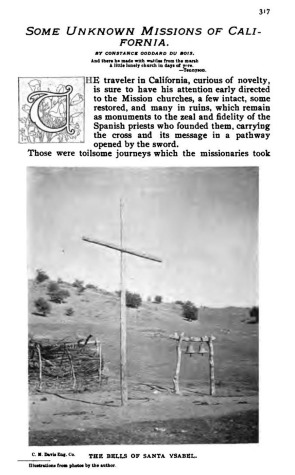 “Far in the ‘back country,’ sixty miles or so from San Diego, in a region untrodden by the tourist, are the ruins of the Mission of Santa Ysabel. Leveled by time and washed by winter rains, the adobe walls of the church have sunk into indistinguishable heaps of earth which vaguely define the outlines of the ancient edifice…”

That’s an excerpt from the article beginning on the page you see above, from the November 1899 issue of Land of Sunshine, a monthly magazine published from the mid-1890s through the early 1920s.

Land of Sunshine offers some vivid descriptions of Southern California of that time, including excellent photography. I’d characterize it as a cross between, in contemporary terms, Sunset and the New Republic. This is especially true of issues during the editorship of Charles Fletcher Lummis, from 1893 to 1909.

Lummis was an interesting, and definitely eccentric character. As a young journalist in 1885, he literally walked across the nation to California, writing and sending accounts of his travels along the way to Harrison Gray Otis, publisher of the Los Angeles Times, who hired Lummis as the fledgling paper’s city editor on his arrival.

Lummis would go on to be a prolific researcher, writer and photographer of the southwestern United States. A 1985 Los Angeles Times article credited him with turning Land of Sunshine from “a Chamber of Commerce promotional sheet into a sterling literary magazine.” Contributing writers during Lummis’ tenure included Jack London, Joaquin Miller and Edwin Markham.

There were also lots of stories from Lummis himself. Among issues he spoke and wrote about were the rights of Native Americans and the need for historic preservation. He helped found two organizations, the Sequoya Club and the Landmarks Club, to take action on those issues.

I’ll definitely be looking further into issues of Land of Sunshine and the character Charles Lummis. In the meantime, the magazine has fortunately been scanned and digitized on the archives.com website, at https://archive.org/ and search for “Land of Sunshine.” There are also a number of bound volumes of the original print editions in the Genealogy Room of the Carlsbad Public Library. I heartily recommend you check it out.

In addition to archives.com, sources for this post included the Los Angeles Times, the Historical Society of Southern California, and the archive of the University of Virginia’s Institute for Advanced Technology in the Humanities.

So proclaimed the headline of an article in the San Diego Union of January 8, 1913.

“Spring politics took on more life yesterday when it became known in San Diego that George W. Marston, prominent merchant and pioneer of the city, is a possible candidate for mayor at the April election.”

The paper reported that a letter “was sent to Marston yesterday by twenty-seven prominent citizens of the city strongly urging him to make the mayoralty race and pledging their support to his candidacy.”

The text of the letter was printed in full by the Union, which somehow got it before even Marston did. The paper called him up to ask about it, and Marston replied that “I was told tonight downtown that the letter had been sent to me, but I have not yet received it and I can hardly give an opinion on a letter I haven’t read.”

One of the interesting things about this particular article is that Marston also volunteered that he had spent the previous evening at the home of Julius Wangenheim. Mr. Wangenheim just happened to be one of the signers of the letter urging Marston to run. But when the Union phoned Wangenheim about it, he told them, “I can’t say whether he will be a candidate for mayor or not. Although he was at my home this evening, it was a literary gathering and we did not discuss politics.”

Wangenheim hastened to add that he “sincerely hoped” Marston would make the race.

There are two other interesting things about this article. One is its position, on column one of the front page of the Union’s Second Section. The other is that the entire rest of the page is taken up by an advertisement for Marston’s Department Store, headlined in letters of comparable size to the article, “Marston’s January Sales.”

The arrival of Santa Fe Railroad service to the city of San Diego in 1885 triggered a boom in the city and the county. Here’s one personal story of those times.

One of those arriving just before the boom got under way was a lawyer named Thomas Hayes. Hayes, then 35, came from Kansas where he’d been Brown County Attorney for a number of years. Severe health problems led his doctor to advise him to seek a cure in the sunnier climate of Southern California. After a brief time in Los Angeles, Hayes moved on to San Diego in September 1885, which he found much more to his liking.

Hayes arrived by ship. The railroad line was still being worked on and service wouldn’t begin until November of that year. When his ship arrived he accepted a ride in a horse-drawn “hack” to the Florence Hotel on Fir Street between Third and Fourth. Not long after the trip began, the young lawyer nervously asked the hack driver where they were headed.

“The Florence Hotel in those days,” Hayes recounted to historian Alan McGrew in 1922, “was then way, way out of town, or so it seemed.” After his first breakfast at the hotel, Hayes went out for a look around.

“I was indeed out in the country,” he found. “As I stood by the side of the hotel and looked about, I could see little but wild country. There was a big flock of sheep near the hotel,” said Hayes, and further on he saw “little but sagebrush and cactus.”

In a few months Hayes had regained his health (“…in a short time I had added twenty pounds to my weight and felt like a boy…”). He returned to Kansas in the spring of 1886, but not for long (“the California ‘fever’ had taken possession of me…”). He came back by train in June of 1886, and found “the town was beginning to be very active.”

Soon there commenced “the wildest boom I ever heard of in this or any other country….Almost everybody soon went into the real estate business…”

Whether “everybody” in town had plenty of money might be hyperbole, but speculation and what we’d today call “leveraging” was stimulating business, as well as prices. When Hayes decided to jump in and buy 40 acres in “South San Diego, as it was called then, or Imperial Beach, as it is now known,” the asking price was $5,000, the terms half down, the other half due in 60 days.

He had the money for the down payment, and a letter from the governor of Kansas to a local bank president that “my name was good for any sum up to $10,000.” So Hayes bought the property and opened up a real estate office. He soon had a couple come in looking for land and told them about his original forty-acre parcel, offering it to them for $12,000.

Recounting this in the conversation years later, Hayes admitted, he only expected them to offer $6,000, and “I should have been glad at that time to get my money out of the deal.”

The couple came back and accepted his $12,000 offer. This was “exactly 30 days after I had bought the land.”

Hayes confessed to having second thoughts about the deal, feeling he had “taken more for this land than it is worth,” and feeling he “ought to look into it.”

“That’s an example of how things went,” said Thomas.

Sources for this post included the book, City of San Diego and San Diego County: Birthplace of California, by Clarence Alan McGrew, published in 1922, historic San Diego newspapers and the website of the San Diego History Center.

I invite you all to sign up for my OASIS lecture on The History of Immigration, this Wednesday, October 8 at 1 p.m. at the San Marcos Library, 2 Civic Center Drive. For more information visit http://www.oasisnet.org/ , go to “Find A Class,” then “San Diego County,” then “Classes,” then under “Instructor” type “Vincent Rossi.” You’ll then see a button to enroll in the class.