Hello history seekers. My apologies for getting behind in posts, but I’ve been dealing with “day job” demands with the added stress of these times when “day jobs” are on slipperier ground. At any rate, at this time when diversity and immigration continue to be points of argument among some, I present one prominent example of the values of both. 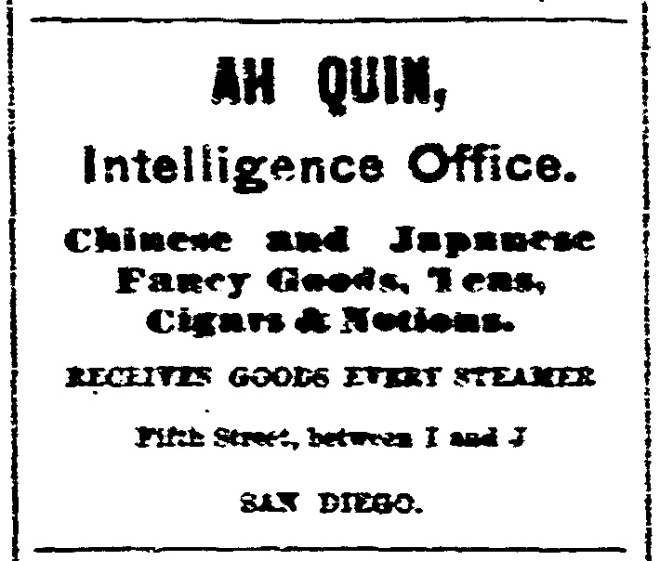 A check of the paper for most of the 1880s shows the same ad running pretty regularly. Ah Quin was born in 1848, the son of farmers in the southern Chinese province of Guangdong. He learned to speak both Chinese and English in missionary schools in his homeland, but in 1868, at a time of political and economic turmoil in China, his parents sent him to the United States. He settled first in San Francisco, but over the next few years moved to Santa Barbara and even spent some time in Alaska, working at the usual entry-level jobs like cook and houseboy. But he also continued to pursue educational opportunities at mission schools while learning about merchandising from an uncle.

Ah Quin came to San Diego in 1878 and would spend the rest of his life there. His store was a prime spot for imported goods of all kinds, as indicated by the ad, as well as a communications center (“Intelligence Office” means a telegraph office).

While his business was in the heart of an emerging Chinatown, his customer base included the whole city. An item in the Union on Christmas Eve 1881, offering readers suggestions on places to shop for “candies, toys, dolls and all sorts of quaint and funny things” for “the little folks,” advised that “Mrs, Cohen, Messrs. Schiller, Schneider, Raffi, Wolfsheimer, Roberts, Beers and Ah Quinn have them in the greatest abundance.”

In addition to running a store, Quinn used his contacts in both the Chinese community and the general business community as a labor broker, recruiting Chinese railroad workers whose labor served to connect San Diego to the rest of the state and ultimately, the nation.

After the railroad was completed Quin also got involved in real estate, “often leasing his properties in places like Mission Valley and Bonita to fellow Chinese so they could grow vegetables to sell at market,” according to an article in the San Diego Downtown News in 2014. That article noted the opening of an exhibition at the San Diego Chinese Historical Museum to mark the 100th anniversary of Quin’s death.

In a lecture at the opening ceremony, historian Murray Lee said “There is no other person in the early history of the Chinese in San Diego, California who is more deserving of being included among the founding fathers of the city, along with the likes of Alonzo Horton and George Marston, than Ah Quin.”