The Bonsall Union School District operates four schools today. However, if you mention the “little old Bonsall Schoolhouse” to most local residents they’ll know which school you’re talking about: the one-story wood-frame building with the bell tower in front on Old River Road.

The building still stands today, being restored as a county historic site by the school district with the help of the Bonsall Woman’s Club. In 1984 the club’s Landmarks and History Section published the book The Little Old Bonsall Schoolhouse, which helped secure the building’s status as a history site and is the source of much of what’s known about the school.

The book noted that the school first opened in August 1895 as the Mount Fairview School, the community being known as Mount Fairview at the time. The first teacher hired was Mrs. Elise Averill, who received “”$60.00 per month.” There were four schools comprising the district at the time, and the book observed that “It is interesting to note that salaries had not increased since 1882 and, in fact remained the same until 1905, when they were increased $5 to $10 per month, depending on circumstances. It would take 37 years (1882-1919) for teachers to earn $90.00 per month…”

I can’t say for sure whether the district’s salary policy had anything to do with it, but by the early 1900s, Mrs. Averill had moved to Arizona, where she taught English and Physical Culture at the state Normal School, which is now Arizona State University.

She would return to California within a few years to teach in Oceanside, but not before she made a unique contribution to her adopted state. She collaborated with her sister to compose a song, “Hail to Arizona! The Sun-Kissed Land,” which was adopted by the Territorial Legislature (Arizona being still a territory then) as the territory’s official anthem. It would remain Arizona’s official song until 1919, according to a May 2015 article in The Arizona Republic.

Elise Reed Averill retired after decades as a schoolteacher in San Diego County and died here in 1958 at the age of 104. While the lyrics she wrote to a state anthem may be the closest to celebrity status she ever got, perhaps generations of educated students from Bonsall to Phoenix to Oceanside are her greatest legacy. 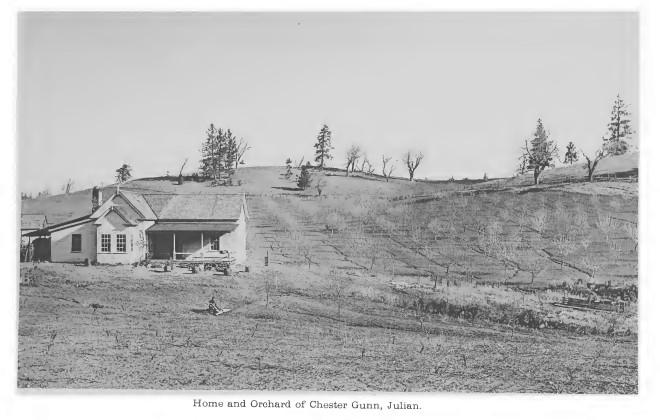 Chester Gunn was apparently a man of many interests. Born on the east coast in 1843, he’d come with his family as a child to northern California. He trained as a machinist up there and then in the mid-1860s got involved in the mining industry in Nevada. Around 1869, he came to San Diego County, eventually settling in Julian, then a developing mining district.

An item in the June 6, 1871 San Diego Union reported the arrival of “Messrs. Chester Gunn and H. N. Reynolds” on the steamer Orizaba from San Francisco, delivering “the machinery for a five-stamp mill to be erected immediately at Julian City.” The machinery was for a quartz mill owned by Gunn and Reynolds, and supervised by Gunn, whom the Union referred to as “an experienced machinist and mill man.”

Gunn did well mining in Julian, but he also discovered another potential source of natural wealth there as a rancher. The book Illustrated History of Southern California, published in 1890, reported in its chapter on Julian that “the apple and pear orchard of Chester Gunn is the largest in the county.”

Gunn found time as well to serve the public as deputy county assessor and county supervisor in a long and varied life before his death in 1928.

I wanted to let you know I’ll be giving two talks at county venues in June and July.

Picturesque San Diego was published in 1887 by Douglas Gunn, a former editor and publisher of the San Diego Union who also served as mayor of the city of San Diego from 1889 to 1891. The book offers a fascinating visual and narrative tour of San Diego city and county in a bygone era when the humans were literally outnumbered by the livestock. It’s been the subject of a few of my posts. This talk will present more of the book’s photos along with some of Gunn’s text about the county of his time.

To find out more about my talk and the museum, go to www.rbhistoricalsociety.org .

Then in July I’ll be giving a class on “Winners and Losers in U. S. Politics” for San Diego OASIS. It’s Wednesday, July 13 at 1 p. m. at the San Marcos Branch Library, 2 Civic Center Drive. I’ll be talking about how, in the first 150 years of our nation’s history, our “two-party system” didn’t always consist of the same two parties. That history offers some important lessons for our political decisions today.

Admission to this class is also free. It’s class number 709 on the OASIS online catalog. Go to https://www.oasisnet.org/San-Diego-CA/Classes and type in “709.”