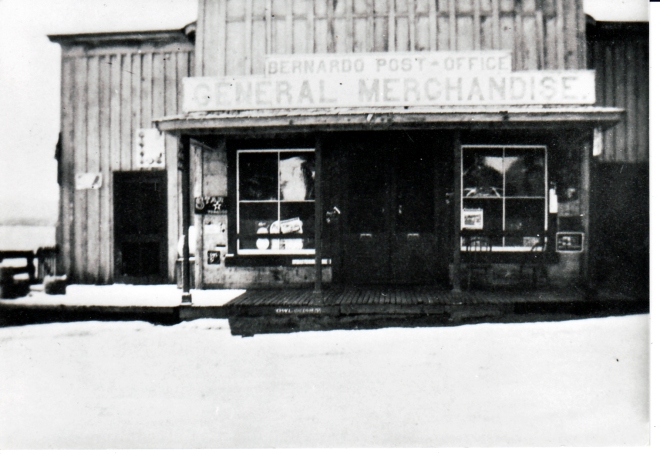 Above is a photo of the Bernardo General Store, courtesy of the Escondido History Center. The photo is undated. But a close examination of the photo reveals an ad for “Owl Cigars” just below the floor boards near the entrance. That ad dates it as sometime after 1887, that being the year those cigars (ancestor of “White Owl Cigars”) first went on sale.  The photo also wouldn’t have been taken any later than around September 1919, for reasons explained below.

The store served the town of Bernardo, a farming village located about a mile south of today’s Westfield North County mall. A short article appeared 98 years ago this month, on August 27, 1919, in Escondido’s Daily Times Advocate newspaper, noting that the general store “is located for the present at two places. Half of it at the old stand and half at the new which is over at the south end of the new bridge. The new building is going up rapidly and will be ready for use when the new bridge is thrown open on Grape Day.”

The “new bridge” referred to a concrete bridge being erected to cross the San Dieguito River a quarter of a mile downstream from the heart of the town of Bernardo. That bridge, dedicated as part of Escondido’s Grape Day festivities on September 4, 1919, would have a fateful effect on the town of Bernardo, which I sometimes describe as “the lost ancestor of Rancho Bernardo.”

You can find out more on this story in my book, The Lost Town of Bernardo, available for sale on this website.

Gregorio Omish is not on most lists of movers and shakers in San Diego County history. He was born in 1879 on the Rincon Reservation and grew up there, an Indian of Luiseño roots.

In the 1900 United States Census, he was living and working as a farm laborer on the ranch of Gustavus Merriam in what is today the Twin Oaks Valley section of San Marco. Gustavus Merriam is known to readers of this blog and others as the first European settler of that area and the man who gave Twin Oaks Valley its name. The nearby Merriam Mountains are also named in this honor.

Merriam prospered as a grower of grapes for wine and brandy and as a beekeeper. But part of the source of his prosperity was his farmhands. In addition to his wife and son, those farmhands also included two Native Americans, one of whom was Gregorio Omish.

In later censuses one can find Gregorio working on his family’s farm on the Rincon Reservation. But he moved around in his work, and in that respect was an example of the pattern followed by many Native Americans in those years.

“In the fifty years between 1850 and 1900 Indian people practiced agriculture when it was feasible but often found the economic rewards minimal,” according to a 1996 essay on Indian labor in San Diego County by archaeologists Richard Carrico and Florence Shipek.  “This is not to say that they did not attempt farming or stock raising but rather that wages paid for labor on other’s farms and ranches often exceeded the economic return of working reservation land.”

Carrico and Shipek cited Omish as an example of that trend, citing sources like the census, newspapers of the day, accounts of other settlers, and personal journals Omish kept. They noted, for example, that “from 1893 to 1910 [Omish] raised wheat and barley for sale, raised and sold livestock, picked grapes, cut and sold wood, hunted and sold quails, and worked as a laborer.”

“Ever the opportunist,” Carrico and Shipek wrote, like most Luiseños, Omish worked at these various tasks as the season or market dictated.”

Gregorio Omish managed to live out his life working the land, dying at the age of 70 in 1949. His obituary in The San Diego Union of May 21, datelined Rincon, was short, but included a sentence more fitting than the reporter may have realized: “He was a farmer and had resided here all his life.”