“The finest olives I have ever tasted I ate at the San Diego Mission; and the olives of this State, when carefully pickled, are far superior to those we get from France or Spain.”

Journalist Charles Nordhoff, wrote those words in his book, California: A Book for Travellers and Settlers, published in 1873.

Nordhoff was on to something.

“During the period 1913-1915 olives were the largest cash crop in the Fallbrook area,” wrote the late Don Rivers of the Fallbrook Historical Society in a 1998 essay which can be found in the society’s archives.

One of the early centers of olive production in the Fallbrook area was the Red Mountain Ranch, which was located just northeast of Fallbrook at the top end of Live Oak Canyon. Here’s a photo of the ranch house and surrounding groves in 1892: 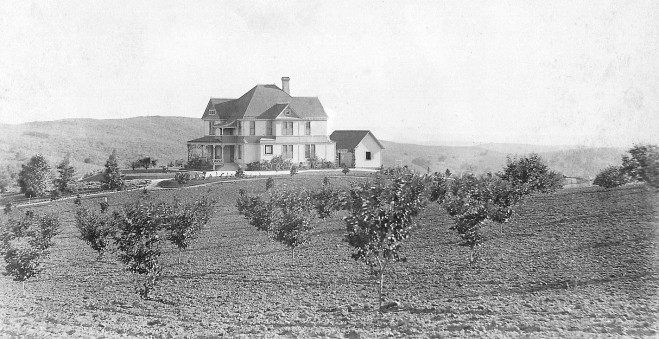 The ranch harvested 150 tons of olives in 1910, according to an article in the March 1911 issue of the newspaper Fallbrook Enterprise.

By the middle of the twentieth century the olive would be eclipsed in local importance by citrus and avocados. Today scattered groves of olives remain, along with street names like Olive Hill Road and Olive Avenue, as reminders of Fallbrook’s olive days.

In addition to the Nordhoff book, sources for this post included the archives of the Fallbrook Historical Society.

This month marks the 170th anniversary of the first raising of the U. S. flag over the city of San Diego. San Diego was then still a part of Mexico, which was at war with the United States. An American naval fleet patrolling off the California coast dispatched one of its ships, the Cyne, to sail into San Diego Bay and take possession of the town.

After encountering no resistance from a Mexican brig anchored nearby, the captain of the Cyne sent a party of sailors and marines ashore in two boats. The party was commanded by Navy Lieutenant Stephen Clegg and Marine Lieutenant William Maddox.

The sailors and marines landed at La Playa (part of today’s Point Loma] and walked five miles into Old Town, again encountering no opposition. “There had been no Mexican soldiers in San Diego for over nine years,” according to Ed Scott in his book, San Diego County Soldier-Pioneers.

Fighting would take place in subsequent months, but on that day the flag of the United States was raised in front of the Casa de Estudillo with no resistance. The log of the Cyne itself records the event pretty matter-of-factly: “At 9 p. m. the launch returned and at 10:50 the Alligator [second of the two boats] with Lieutenant Rowan, after taking possession of San Diego and hoisting the American flag, leaving all our marine guard, under Lieutenant Maddox, on shore to defend the flag and town.”

In addition to the Scott book, information for this post came from the book, San Diego, A Chronological & Documentary History,1535-1976 compiled and edited by Robert Mayer.

I’ll be giving a class on “Winners and Losers in U. S. Politics” for San Diego OASIS. It’s Wednesday, July 13 at 1 p. m. at the San Marcos Branch Library, 2 Civic Center Drive. I’ll be talking about how, in the first 150 years of our nation’s history, our “two-party system” didn’t always consist of the same two parties. That history offers some important lessons for our political decisions today.

Admission to this class is free. It’s class number 709 on the OASIS online catalog. Go to https://www.oasisnet.org/San-Diego-CA/Classes and type in “709.”