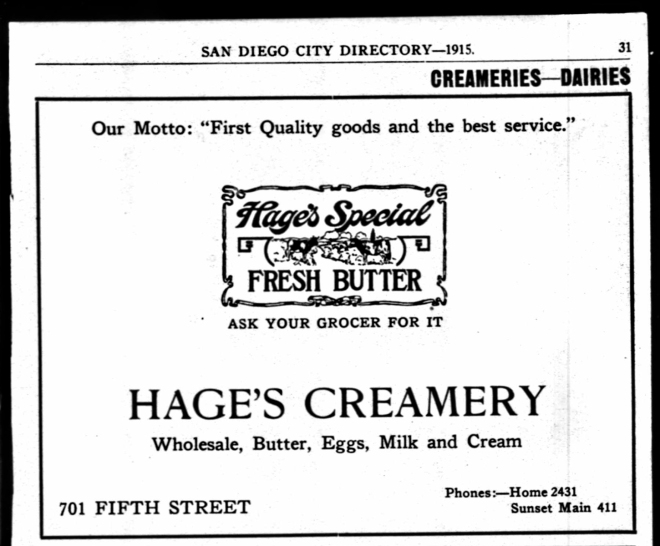 The ad shown above is from the 1915 San Diego City Directory.

Willard B. Hage was born into a dairying family in Wisconsin in 1868. He brought his dairying skills with him when he came to San Diego in 1891.

Starting out delivering milk with his own wagon and a single horse, he did well enough that by the early 1900s he owned creameries in the cities of San Diego, Escondido and Poway.

An article in the January 1, 1916 San Diego Union noted how Hage “became impressed with the possibilities in San Diego’s back country. Backing up his belief, he adopted a novel and liberal policy of supplying modern dairying equipment to back country ranchers and allowing them to pay for it on easy terms.” This, the article stated, “made it possible to develop the dairy industry out in the county in a section that was formerly given over to the raising of grain.”

Interestingly, in both the 1900 and 1910 United States Censuses, Willard Hage lists his occupation as “Dairyman,” while in 1920 he describes himself as “President, ice cream company.”

Willard Hage died in 1925. His business would continue under the family name and ownership and be a San Diego institution until its merger with Foremost Dairies of San Francisco in 1954.