The biggest construction job in San Diego’s history–the Kearny Mesa housing project for defense workers and their families–was contracted for yesterday when the federal works administration awarded a $9,070,000 contract for 3,000 residential units.

They called it the “Blitz Boom,” a term coined by the Saturday Evening Post to describe the surge in defense production in San Diego in 1940. War was raging in Europe. While the United States wasn’t officially involved, Washington had declared a “limited national emergency” in September 1939, calling for “strengthening our national defense within the limits of peacetime authorizations.” At the same time, U.S. defense companies were getting big orders for material from nations fighting the Axis powers, like Great Britain.

How much business were they getting? The September 24, 1940 San Diego Union reported that the total backlog of orders for Ryan Aeronautical and Consolidated Aircraft exceeded the total assessed real estate value for the whole county of San Diego ($231.5 million vs. $221.4 million)!

The production boom of course meant a jobs boom, triggering an enormous migration from across the country to the city of San Diego. Plans for the housing project on Kearney Mesa, whose builders promised “3000 houses in 300 days,” was one of the results. Today we know this community as Linda Vista.

The city didn’t have enough housing even for the people it needed to build the housing. So “defense dormitories” and trailer parks sprouted up in places like the formally rural Mission Valley.

Here’s a photo of a trailer camp for the Linda Vista project workers: 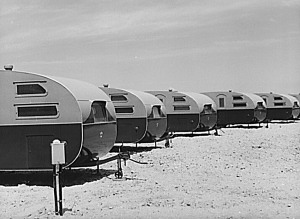 And here’s a photo of the interior of a trailer, with a construction worker and his family: 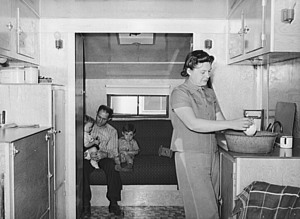 By May, 1941, it was reported that there were 1,500 people moving into San Diego each day. And this was seven months before Pearl Harbor.

It was the beginning of a profound change for San Diego City and County.

Sources for this post included historic San Diego newspapers, the Journal of San Diego History and the photo archive of the Library of Congress.

One thought on “The Blitz Boom”