“We are having school—again. A Mr. Pepper. I sincerely hope he can fill the bill, and meet the requirements of the boys. A man is what that school needs. He looks very nice. Rather bald, black hair and eyes, dresses in black, wears a stiff black hat. Is withal a good looking professor. He called at the door Saturday to let me know school had commenced and he wanted to board here, but I vetoed that. Anything but a school teacher in one’s house.”
Eliza Sikes, writing from her farm in Bernardo to a friend in northern California in November, 1881.

I wondered who was this Mr. Pepper? So I did some research.

Michael William Pepper was 34 years old when he came to Eliza’s door.  He was born and raised in Wisconsin, son of an Irish immigrant farmer and a mother who presumably died when Michael was around two. Rather than follow his father’s footsteps into farming, he went to the University of Wisconsin where he earned a bachelor’s degree and went on to get a law degree in 1873. He started teaching in Milwaukee.

By 1878, Pepper was a California resident and was admitted to the state bar. Yet three years later he was teaching in a country school, a low-paying and pretty much itinerant position. What brought him there?

We really don’t know. We do know that between 1890 and 1918 he lived in a number of communities all over the county, including Escondido, Ramona, and De Luz as well as downtown San Diego. In each community he served as a teacher and at times even a principal at schools from Old Town to Warner Springs.

News articles tell us he was highly regarded by many school officials and by his fellow teachers.

We also know that in 1912 he suffered a mental breakdown. “M. W. Pepper, one of the best educated men of the county, was declared mentally unbalanced by a lunacy commission in department two of superior court this morning, ”reported the Evening Tribune of June 8, 1912. “Pepper was a school teacher at Vineyard,” the article stated, adding, “He lived alone and according to County School Superintendent Hugh J. Baldwin he was subject to stomach trouble. As he possessed some money arrangements are being made to send him to a private sanitarium.”

We also know that he apparently recovered his health enough to be living on his own in San Diego, appearing in city directories in 1917 and 1918. He was also listed as a teacher. Whether that was something he said to save face, or he was able to work in the field he obviously loved, hasn’t been determined.

Michael William Pepper died in March, 1920 at the age of 73. The only survivor mentioned in his obituary was his younger brother Joseph back in Wisconsin. Michael was buried in Holy Cross Cemetery.  Although he’s listed in cemetery records, he has no gravestone. A tree marks his burial spot. 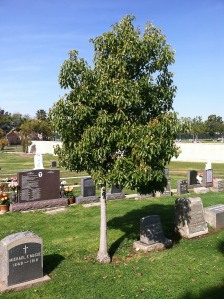 The Congress of History of San Diego and Imperial Counties presents their annual two-day conference: “A Half Century of Local History: Past, Present, and Future,” March 7 & 8 at the Marina Village Conference Center (near Sea World). For details visit www.congressofhistory.org/ .

3 thoughts on “The Mystery of Michael Pepper”